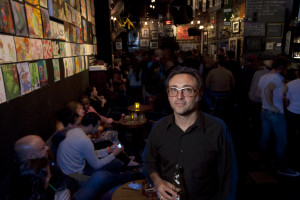 Michael was born smiling, during the second round of the biggest fight in history, when Ali met Frazier for the first time as two undefeated champions in New York City’s Madison Square Garden. Raised in Las Vegas. Nevada. The son of a Holocaust Survivor turned exotic dancer and a WWII fighter pilot turned cab driver. He went on to receive a BA from Marquette University in 1992 and has had his work shown throughout the United States.

His work has been covered in Ad-busters Magazine, Punk-Planet Magazine, Asterisk SF, The San Francisco Chronicle, SFAQ, CNN, 7X7, The Bay Guardian, White Hot Magazine and Jazz Now Magazine. He has been awarded grants from The Office of the Mayor, San Francisco, and the Bill Graham Foundation. He lives in San Francisco with his two daughters and his dog. He is also the owner of The Madrone Art Bar and Pops Bar.